The GLAMURS Final Conference assembled over 120 people, including researchers, stakeholders and policy makers in Brussels on November 30 and December 1. A summary of the keynotes and plenary sessions is available now.

The GLAMURS Final Conference assembled over 120 people, including researchers, stakeholders and policy makers in Brussels on November 30 and December 1. Read below to find a summary of the keynotes and plenary sessions:

On the first day of the conference, the participants, a varied mix of researchers and practitioners, were welcomed by GLAMURS project coordinator Adina Dumitru (University of A Coruña) and Georgios Papanagnou (European Commission, DG Research and Innovation). A speech by Nick Jacobs (International Panel of Experts on Food Systems) emphasised the need for integrating local innovations and building a common food policy concluded the introductory part of the conference.

Following this starter, the keynotes of the day were held under the heading of “Getting inspired: obstacles and prospects for the up-scaling of sustainability initiatives”. Claudian Dobos (President of ECOLISE, founder of Aurora eco-village) pointed out that “Change is happening in the blind spots” but was also very much about embracing what you didn’t know, relating to fear and creating heartfelt relationships of care and closeness. In her video-transmitted speech from Leipzig, Nina Treu, one of the leading figures of the Degrowth movement, calls for a total shift of paradigm, new norms and new forms of organisation to transform our world. The main messages of both keynotes pointed out the necessity to both foster an inner shift as well as a shift of the system to enable change.

Dr. Ines Omann (Helmholtz Centre for Environmental Research) and Dr. Jaco Quist (Delft University of Technology) were facilitating the 1st day of the conference. After their presentation of the aims and the agenda they introduced the group work in the parallel sessions.

The sessions started with short inputs from case study stakeholders and researchers, followed by discussion and group work. Harvesters collected the main results of each session around questions of the relevant GLAMURS findings, the project’s impact in the given field and an outlook on the future. The discussions in the parallel sessions focused on the following GLAMURS themes:

This session was centred around the Scottish Case Study (and also the Austrian one) and the varied impact of flexible working time and commuting as well as the limits of a pure time-use perspective.

This session focused on the Italian Case Study and among other points highlighted the complexities involved in community-led local food production as well as barriers and possible support for initiatives.

This session reported from the Dutch Case Study and referred to reasons for involvement in local repair initiatives while outlining the importance of a vivid community for their success.

This session shared knowledge from the Romanian and the German Case Study to help further the understanding of these places that are specially committed to a transformation.

Dr. Ines Omann summarised the results of the sessions (harvesting of the group work) distilling different forms of impact GLAMURS had. Her conclusions highlighted the ability of collaborative research projects to open the door for initatiatives and opportunities for mutual learning among initiatives , the observation that there is still a lack of data on sustainable lifestyles and limitations of a single study thus warranting further research and the necessity to find out more about the opportunities and implications of alternative economic models.
These results provided inputs and key messages for day 2 of the conference.

Prof. Ricardo Garcia Mira, former GLAMURS coordinator and now member of the Spanish parliament, opened the second day of the conference. His welcome was followed by MEP Herbert Dorfmann, who explained that a lot of legislation was underway to implement some of the suggestions raised in GLAMURS, Jose Manuel Silva, Advisor to Spanish Government who stated that innovation needs more credits instead of subsidies. Resarch like GLAMURS needs support and Salvador Naya, Vice Rector of the University of A Coruña, who highlighted the need for more interdisciplinary projects like GLAMURS.

Next, Project co-ordinator Dr. Adina Dumitru provided a good overview of the inter-  and trans-disciplinary character and multi-method approach of the GLAMURS project. She emphasised the important role of knowledge co-production and spoke about the identified factors influencing sustainable lifestyle choices. Research like GLAMURS could open the door for real life initiatives, and political support would be one possible other driver, even though some initiatives are more critical in that regard. Overall, sustainable lifestyles are socially connected, meaningful and time-rich, which naturally influences upscaling.

Prof. Derk Loorbach, Director of Dutch Research Institute for Transitions (DRIFT) explained in his talk that transitions are non-linear systemic changes dominant culture, structure and practices that take place over a period of decades and are by definition unpredictable and unmanageable. Moreover, he pointed out that transitions explain persistency, lock-ins as well as disruptive systemic change. There are patterns, mechanisms and dynamics that can guide strategy and action. Sustainability transition research is about facilitating and structuring collective processes of learning-by-doing. Mr. Loorbach also spoke about the characteristics of transition management and emphasised the role of space for experimental governance and radical visions.

In his speech on “Living both Well and Sustainably: Research Insights and Policy Suggestions” keynote speaker Tim Kasser (Knox College, USA) pointed out that “the good life is not the goods life”. He explained that people are socialized to believe consumption will bring happiness, while over-consumption is damaging the Earth’s climate, habitats, species, etc. Therefore, people are likely to believe that ecological sustainability will come at the cost of their well-being. The evidence, however, suggests that wellbeing is positively correlated with living in more sustainable ways. Mr. Kasser went on to outline that while this positive correlation is well-known, more research was needed to detect reasons for this: values, policy, mindfulness, and activations are just some of the factors that seem to matter.

He concluded that well-being appears to be compatible with engaging in pro-ecological behaviors, as was demonstrated across numerous studies. Future research should concentrate in explaining the correlation between well-being and pro-ecological behaviors. In this respect values, mindfulness and time affluence play an important role (see figure). Mr. Kasser provided several suggestions how future research should look like and demonstrated many possibilities for interventions and policies.

Each of the parallel sessions of day 2 consisted of the presentation of three scientific papers: two from GLAMURS researchers and one from an invited researcher on complementary or relevant aspects from other European projects. Each session had an invited discussant, either from the European Commission or from the GLAMURS Advisory Board and addressed some of the questions or practitioner messages from day one.

Prof. Michael Finus (University of Bath) facilitated the final plenary session on “lessons for a future research agenda”. It was started by 6 short statements based on the two days’ discussions by both consortium members (Prof. Daan van Soest, Dr. Giuseppe Carrus and Dr. Gary Polhill) and members of the advisory board (Prof. David Uzzell and Dr. Flor Avelino), as well as Ana Sanchez, who followed our project as a stakeholder over the whole duration. Some of their key messages were:

Methodologically speaking, the understanding of knowledge-co-production needs further investigation to allow for widespread application and to develop a terminology for common understanding of the issues at stake. This requires space for experimentation and a reflection of researchers about their roles. “Research is a way of being mindful”.

Involving people, communities, and regions, “managing” fear in the light of uncertainty and studying non-mainstream (“mad”) people who are often out of focus of mainstream research. Also, a proper understanding of economic impacts are important aspects for overcoming resistance.

Since social and health issues are considered more important than the environment, these aspects need to be connected in further research designs. The link of social support and sustainable lifestyles need to be better understood from an economic point of view.

On the micro-level, concrete actions for mitigation and adaptation on reducing resource inputs (raw materials) in production and consumption (and the impacts of changes in consumption on production), such as re-use and repair but also the management of water and food, should be further investigated as part of “new ways of organizing the economy”, especially towards a circular economy, differentiated by geographical space (e.g. the Mediterranean and the Nordic regions).

One reoccurring topic of the conference was that saving the planet succeeds when both individuals and governments work together. This needs a systemic intervention /comprehensive policy approach covering all levels (from individual to global). Mechanisms of sustainable development (policies) should be derived from determinants of lifestyles. Change cannot be organized top-down but needs support (conversations instead of prescriptions). While initiatives provide options, policy can trigger mutual engagement towards sustainable development, support building networks and remove barriers: Sustainable lifestyles require mutual support by people, initiatives and policy, which considers winners and losers – solutions require the support by both groups.

Prof. Ricardo Garcia Mira and Dr. Adina Dumitru (University of A Coruna) closed the conference by thanking those who organized it as well as the participants.

Visual artist Leandro Barea supported our thinking with creative tools and also reflected the contents of our conference in images. 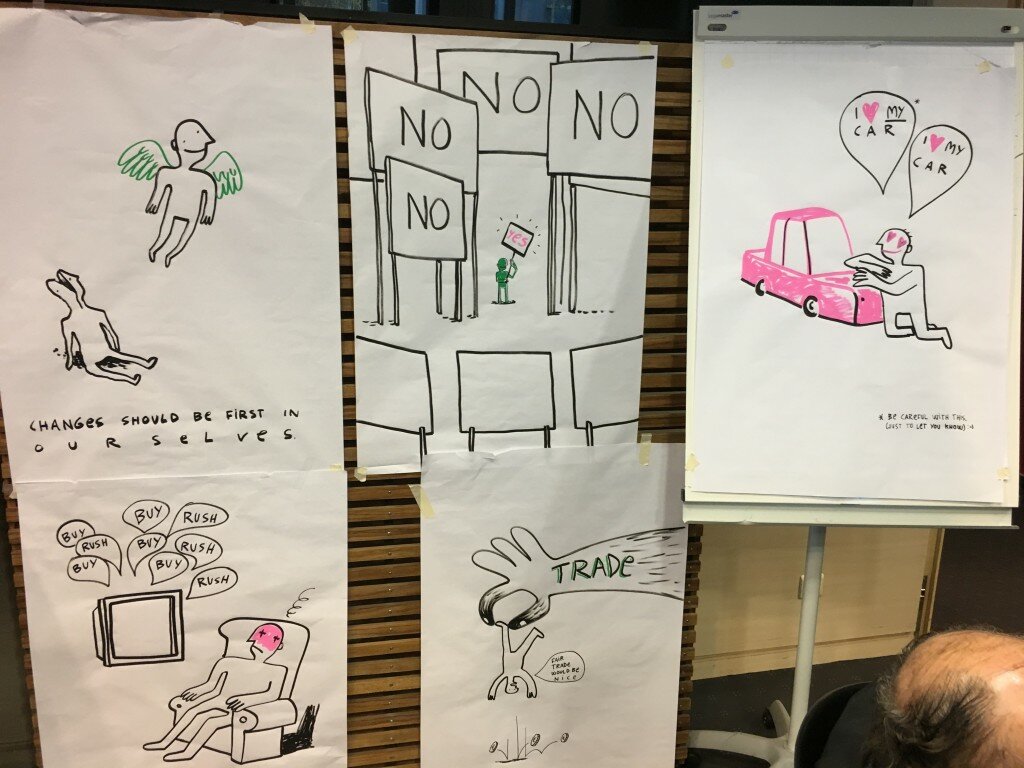